The nights on Mt Cook were very quiet and peaceful. I had sleep in and went down for breakfast at about 11 a.m. After lazy early afternoon, I left the house at about 2:30 p.m. to listen to Hollie Smith playing live in Courtenay Place. The street was closed, just like it was during the big premieres of The Lord of The Rings or Lovely Bones. In front of the Embassy Theatre there was a stage and Hollie had already started her performance when I arrived. 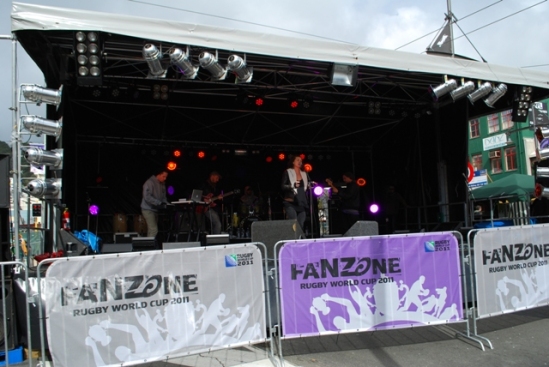 After the concert I had some time before I was to meet J.&R. at Green Man Pub to watch a rugby match, so I went to buy a BBH Club Card ($45). Their hostels are usually cheaper than the YHA ones (with the card even cheaper and I get $20 for phone calls with the card) and still pretty good. I couldn’t buy the card at the Visitor Centre, but only at the Wellington Downtown Backpackers, which is opposite the Railway Station near the Stadium. I end up following the crowd going to the Ireland v Wales match, with mostly the Irish supporters. 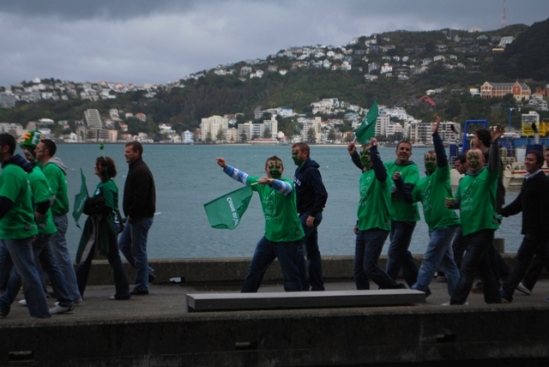 The Green Man was very crowded and there was no room to even stand without being pushed around all the time. When J.&R. came, we decided to go to a less busy pub. On the way they had noticed the Tap House, a new pub, and there was a lot more space. It was actually pretty nice and we could sit by the bar and watch the Wales winning over Ireland. I think we were the only ones who were happy about that. I wanted them to win, because I was sorry they lost with South Africa.

When the match was over, we went to Havana Bar for dinner. It was a very cool restaurant owned by the same people who have Fidel’s café and very close to Cuba Street but in a such place that you’d never expect to find a restaurant there. And it’s very cosy. I met J.&R.’s friends. He was from Austria and she was American, so at one table there were five nationalities sitting. Each one of us ordered at least two dishes and we shared them. All of them were so delicious. When we finished and the waitress brought us the bill, we saw that there were less dishes than we had ordered. Some of us said we shouldn’t say anything and pay less, others wanted to tell the waitress to add the missing dishes. We finally decided to give a big tip without saying anything.

Then we went for a walk along the Courtenay Place. The atmosphere was amazing, people were singing, celebrating (while we were having dinner England lost with France, which I wasn’t happy about). One Kiwi offered me his arm, so I was walking for a while holding him and we were talking about his friend who was a great guy but pretty ugly and he didn’t like rugby (I may or may have not mentioned him that I’m looking for a Kiwi boyfriend to stay in New Zealand 😉 ). The guy I was talking to had been already taken and his fiancé was walking before us.

We listened to Tommy and the Fallen Horses. They were good, but it was getting cold, so we went back to Cuba Street. On the way I found $10 lying on the street, which was great, because I had just paid for quite expensive dinner. (My pen run out and I found another one on the street the other day. I think I’d survive on the street with my good eyes 😀 ).

The night was still young. My new friends suggested to go to Matterhorn. When we got in, I thought the music was very good and when I saw the DJ, I understood why. It was no one else but the one and only Mike Fabulous! I just had to talk to him about the previous night at the Mighty Mighty and how I enjoyed his music. He was very happy to hear that. He told me he’s a DJ here like once or twice a month. How cool was that to meet him there?! He asked me what I was doing in New Zealand etc. and recommended to check out The Yoots who were to play on Sunday. He was a really lovely guy. Oh! And he left a message for you!

R. said that I’ll have to go on some kind of detox, when I come back from New Zealand. At the moment I don’t want to think about it.

recently i wrote about